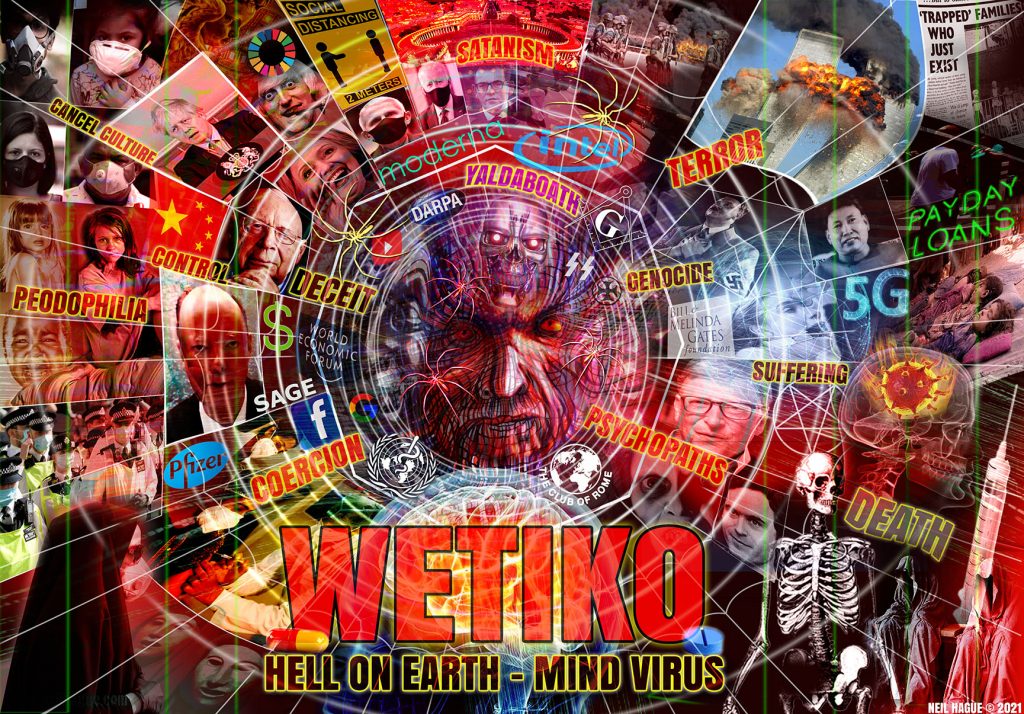 In keeping with the time of year (Halloween) I am going to present a few new images that relate to a subject most will already have some knowledge of. As an illustrator I’ve tackled various esoteric subjects (both light and dark) over the past few decades. The illustrations in this blog are my ‘getting to the point’ visually on what currently avails humanity. We need to really see the forces behind our so-called reality, for what they are – the opposite of ‘to live‘ (evil).

In previous blogs and books I’ve talked about the Archons of Gnostic mythology and their connection to what Christians call demons and Islamic texts call the Jinn. Yet, according to Native Americans, this dark chaotic, evil source is called ‘Wetiko’ (see above). For such indigenous cultures, Wetiko is an evil spirit (force field) that invades human minds. The Native Americans called it a ‘virus’ of selfishness (psycopathy) expressed in various psychopathic traits found in all cultures. A modern extreme expression would be the classic psychopathic serial killer, or tyrannical takeover of nations (the world). Wetiko collectively, is simply Hell on Earth. And haven’t we experienced a hellish reality in recent years?

Predators, possession and a war that never ends

At both an individual and collective level, Wetiko is a physic pathogen forcing the victim to feed their insatiable needs as if they were starving, fearful, even hateful of others. It is Wetiko that causes both gluttony and famine, avarice and poverty, etc. It is the force behind extremes and the deceit sown to install such extremes. According to the Native Americans ‘it’ (Wetiko) makes humanity become its own worst enemy, spawns the ‘sane-insane’ and provides a ‘vibrational field’ through manipulation of consciousness. The late Native American activist and poet John Trudell summed up the possession and insanity caused by Wetiko in his song, Crazy Horse, when he said:

Too many people
Standing their ground
Standing the wrong ground
Predators face he possessed a race
Possession a war that doesn’t end
Children of God feed on children of Earth
Days people don’t care for people
These days are the hardest
Material fields, material harvest
decoration on chains that binds
Mirrors gold, the people lose their minds

The distinction between an evil person or spirit simply relates to the Archontic/Wetiko ‘possessing’ a human or acting as ‘consciousness’ for the host it has possessed (see my image below). In extreme cases Wetiko can change the human ‘being’, make them appear differently to those who experience Wetiko first hand. Indigenous cultures have called this phenonema ‘shapeshifting’. It is not a physical (flesh and bone) shift, which would be impossible, it’s purely energetic (holographic), ‘appearing physical’ to anyone who sees such phenonema. This is why possession can seemingly turn the eyes ‘black’ (no white around the pupil), of those who are under the influence of extreme Wetiko. 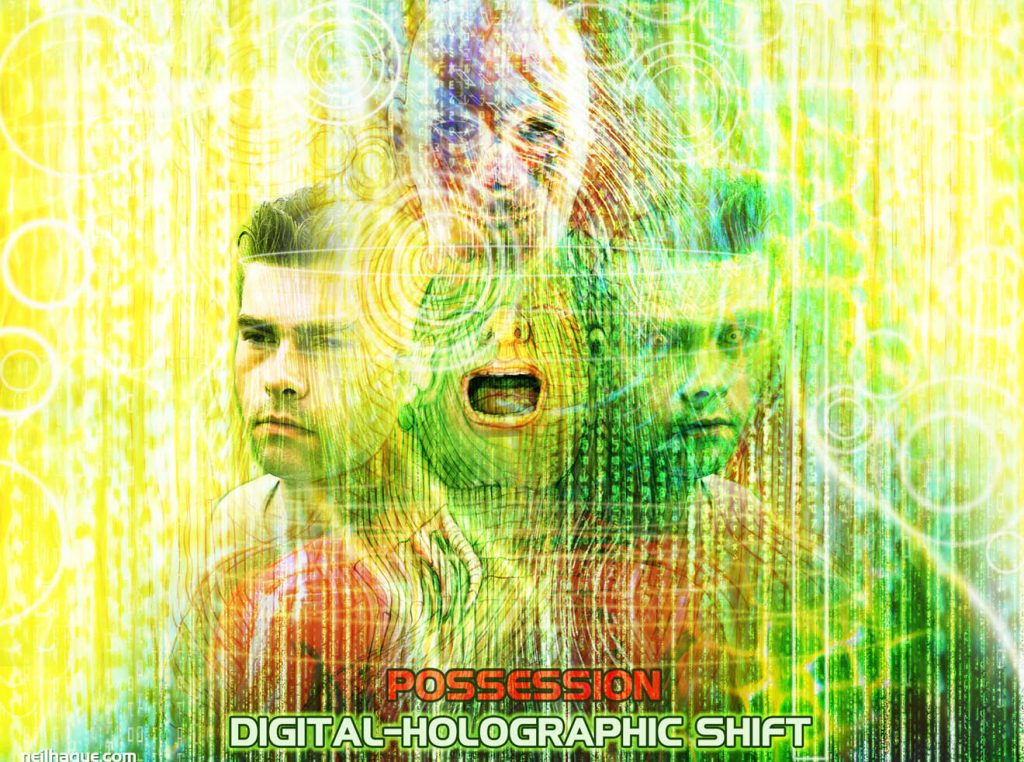 Wetiko is also the legendary Predator found in both ancient and modern cultures. It could also be seen as every other name for a force of evil, inversion and chaos. Wetiko is the mindset that easily divides humanity (see every form of manufactured division in society), from anti-this, to pro-that; and as a whole, it creates the ‘holographic field’ we fight each other and create endless pain and suffering in our world. In an excellent book called Dispelling Wetiko, Breaking the Spell of Evil (2013), the author Paul Levy describes Wetiko in the same way as the Gnostics described the Archons. They are the same distorted consciousness operating across dimensions of reality connected to our human mind and body. Levy says: ‘the subtle body of wetiko is not located in the third dimension of space and time, literally existing in another dimension … it is able to affect ordinary lives by mysteriously interpenetrating into our three-dimensional world.’ See image below. 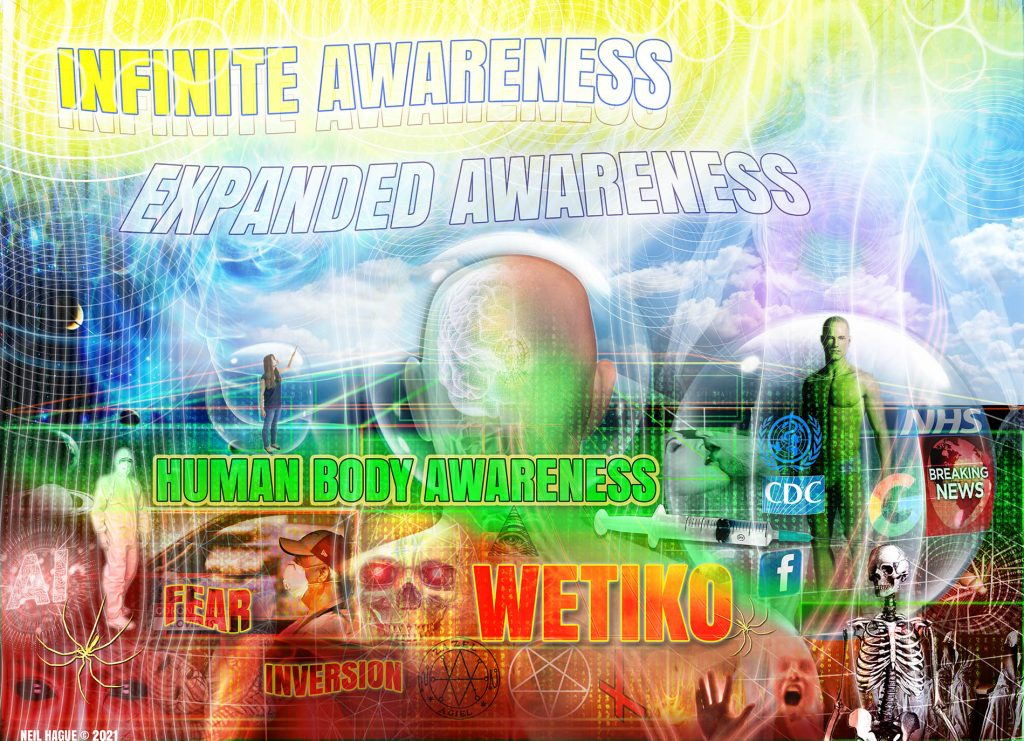 Skynet and control by a non human dimension

Wetiko is non human, but influences our human world through our subconscious mind. It inspires the ‘five sense’ mind to have thoughts and opinions that are ‘Wetiko’s’ thoughts, or its state of awareness. Wetiko has ‘hacked’ our five sense mind and renders us helpless when we only percieve life through the human body-mind. As Levy shows in his book, ‘Wetiko covertly operates through the unconscious blind spots in the human psyche, rendering people oblivious to their own madness and compelling them to act against their own best interests’. This explains why so, so many people have become oblivious to the obvious ‘control’ forced upon them thanks to a so-called ‘virus’. Covid and the ‘fake’ vaccines are ‘vehicles’ for more control by Wetiko forces. 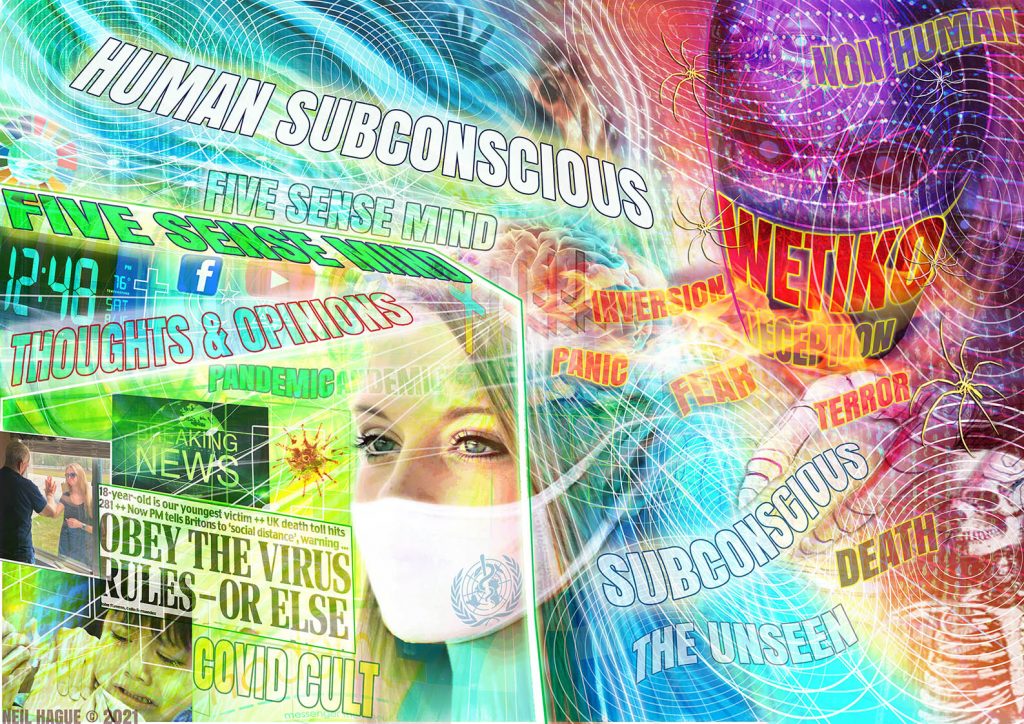 A form of control that will be based on rule by Artificial Intelligence and the true nature of what the scriptures call the Demiurge, or the Anti-Christ. The Demiurge (Yaldabaoth) is a form of AI, expressed so well in the Gnostic inspired Matrix movies as the ‘machine world’. So is the push towards Transhumanism. The ‘Skynet’ system from the Terminator movie franchise is another expression of such evil and control over humanity. A reality that is seemingly no longer restricted to Science Fiction. The ‘Net’ (skyNet) is the invisible weblike infastructure we are already emersed in. The use of autonomous or near-autonomous combat systems connected to ‘cloud ‘ AI technology are also ‘Skynet’. Even the mass surveillance in China (through its network of monitoring systems) has been called the Skynet Project and all are expressions of Wetiko.

The character Kyle Reese has an epiphany in one scene from Terminator Genisys (2015), where he has come back from the future to a time before Skynet takes over and he sees people using their androids, pads, apps and other AI-based devices and says, “So this is how the war against humanity happened, we allowed ‘it’ (cloud-based artificial intelligence) in.” As Martin Ford points out in his book The Rise of the Robots (2015): Cloud robotics is sure to be a significant driver of progress in building more capable robots, but it also raises important concerns, especially in the area of security. Aside from its uncomfortable similarity to “Skynet”, the controlling machine intelligence in the Terminator movies, there is the much more practical and immediate issue of susceptibility to hacking or cyber attack.

The potential for power cuts, cyber sabbotage, a Third World War and ever more tight control of our lives (via electronic money, etc), accelerated hugely with the dawn of all things ‘Smart’. Agenda 2030, or the Great Reset would be born of such chaos and tribulation.

‘All things Covid’ are expressions of Wetiko

All things ‘Covid’, including the electronic app based ‘vaccine passports’ are also major expressions of the Wetiko ‘hack’, not least the huge divisions caused by the continious manipulation, lies (mantras) and blatant coercion directed by global governments, all of which seem ‘possessed’ by the Wetiko mind. Whether it is the unfolding fascism enforced in Australia (which is acting like a police state at the time of writing), or the constant coercion to take the ‘jab’ in other western countries. All this is the Wetiko mind virus at work in our world (see below). It thrives off fear, control and deceit, which is said to be the ‘language’ of the Anti-Christ in the Bible. For more background to the agenda behind all-things Covid, see my 2020 article Corona & the Cyber-Grid Empire. Wetiko attaches to the human population energetically, like flies are attached to the spiders web, hence why the spider and web symbol connect to Wetiko in ancient cultures. A theme that is also relevant to how the world is woven and controlled still to this today. 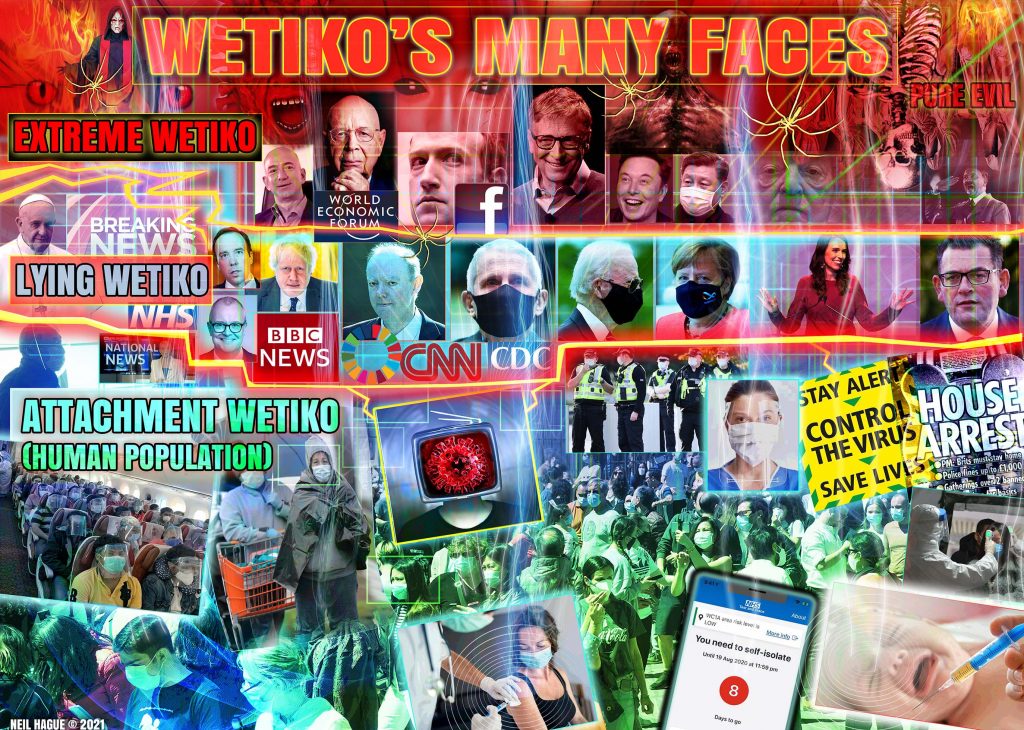 The author David Icke has written at length about such subjects over the past thirty years and in his latest book Renegade Mind, he states:

“Constant war, mass murder, suffering of all kinds, child abuse, Satanism, torture and human sacrifice are all expressions of Wetiko and the Wetiko possessed. The world is Wetiko made manifest, but it doesn’t have to be.

‘Apocalypse now’ or the ‘Kingdom of Heaven’

The two Beasts and the Dragon in the Book of Revelation are Wetiko. The Fourth Beast, according to the scriptures, creates the ‘king of the world’, the kingdom of the Anti-Christ to dominate the world (Daniel 7 and Revelation 13). I will be focusing on another article relating to Revelation in the coming months, but suffice to say, the ‘Great Reset’ (New World Order) is the work of those aligned with the ‘Beast and the Red Dragon’ (China’s power). The mark of the beast in Revelation, is the ‘mark’ of a man, or the ‘jab’, and we have not yet seen the real ramifications of this ‘marking’ of those who have been mainly coerced to receive it. See my blog; 2022: The year of the ‘wise’ & the ‘foolish’.

As I posted on social media in recent months, the scriptures (Revelation) will become more relevant over the next 2 to 3 years. We end the Wetiko mind by stepping out of fear and perceiving life though our true brain, our heart – our unconditional love. We have to become Infinite Awareness, or become our true state of being, so to bypass the Wetiko mind (see below). We have to operate from the perspective of higher, infinite consciousness. Fear and love cannot exist in the same space (reality). We are either living in fear born of lies, or, living lives through fearless love. Those who are in a ‘state of fear’ are in the Wetiko vibration. To detach from the Wetiko vibrational field, we need to see with new eyes (our Ancient Eyes), lose our fear of the future (the virus), and be born again (energetically). Our newfound perception will create a new, more balanced earth reality. We are destined to create ‘Earth as it is in Heaven’. Listen to the words of Christ carefully and ‘feel’ the vibration emanating from the Beatitudes, the Sermon on the Mount. The message here is, in my view, the way out of the Weitko mind.

A time is coming when those who have sat on the sidelines and allowed tyranny to take hold (the Wetiko world), will eventually turn on those in power, thus is the nature of Wetiko. It is the ‘house of desolation’ and has no real power. It will not win, even though we are being put through the hardest of times, with more to come. Infinite Love will never leave us alone! We are human ‘beings’, with a genetic light that cannot be extinguished. Our heart light and our true mind need aligning so to lose our fearfullness, along with the manipulated horrors created via the Wetiko world. 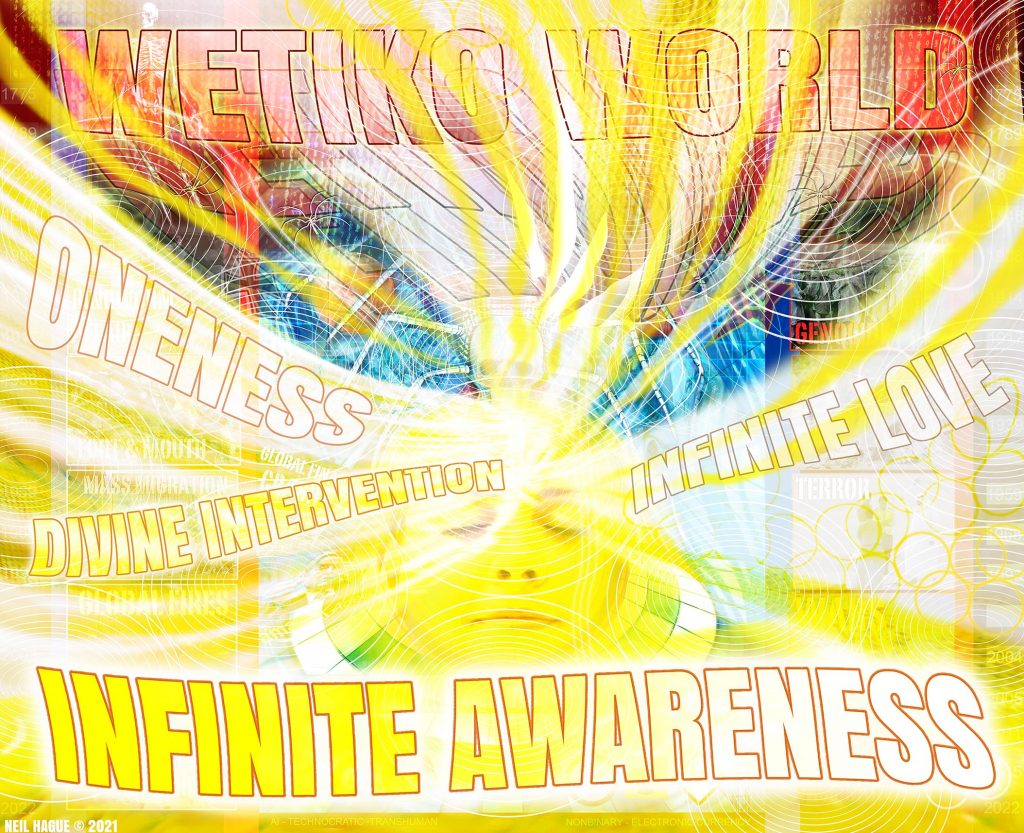 Or as the legendary Bob Marley once sang;

” … Don’t let them fool ya
Or even try to school ya! Oh, no!
We’ve got a mind of our own
So go to hell, if what you’re thinking isn’t right!
Love would never leave us alone
A-in the darkness, there must come out to light”

As I have quoted many times: … verily, I say unto thee, except a man be born again, he cannot see the kingdom of heaven (John 3:3)

See my books for more detailed illustrations and concepts relating to the topics above.

Neil Hague is a UK artist, author and authorial illustrator, originally trained in graphics and book publishing. Over the past twenty years he has developed a 'unique' vision through his style of art and image-making. One that has been described as both spiritual and 'neo-shamanic' by people who have read his books or who have seen his work.